My day started at 6AM with the dogs attacking a kitten. I have never heard such horrific “screams” in my life.  Fortunately the dogs got in the house safe but the poor kitten hid and presuming it was a stray, we weren’t going to risk getting scratched or bit.  All I could think was what else will happen on this lovely day? At 6:30 I followed Josh to drop off his truck for repair work. While waiting for the car garage to open, two employees come out and ask “is that your kitten?”, SERIOUSLY?! The cat hung on tight for a 20 minute ride, speeds reaching 70MPH.   An employee offered to take it to a shelter but the kitten wanted nothing to do with people.  It kept swiping and hissing any time we got close.  Poor thing ran off and clearly had a broken leg; we don’t know if the car ride did that or one of our dogs. Sad that there are so many strays in this area, I honestly wish we could save or help all of them.

Ok, I’m sure you’re wondering why I wrote about that incident.  Basically, it was a crazy morning and soon after dropping Josh’s truck off, he had to take my car to work and a doctor appointment.  He got home just in time for me to head out and babysit Miss E; he cut it close, like a 5 minute window close.
Disclaimer: he didn’t take his bike due to rain in the forecast.

Thankfully I got to spend a few hours watching this cutie:

She ‘read’ to me & scooted around the house on her musical scooter. The instrument sounds need to be improved as they are altering her ear training, LOL.  I actually should have taken pictures of her lunch because she eats better than most kids (and adults for that matter).  A multi-grain wrap spread with hummus + a side of blue berries; what an appetite.  Now let nap time commence, 2 hours of quite… so I read (yes, I realize the irony).  I’d love to read more but if I’m not cleaning, hanging out with my sous chefs, or teaching, I’m getting dinner ready. Yesterday I did not have to worry about the last thing.  My payment for watching Miss E is food, hey no complaints here! Kathy prepared zucchini and yellow squash that was bathing in a delish baggie of goodness and her husband got us chicken that had been marinating for THREE DAYS. 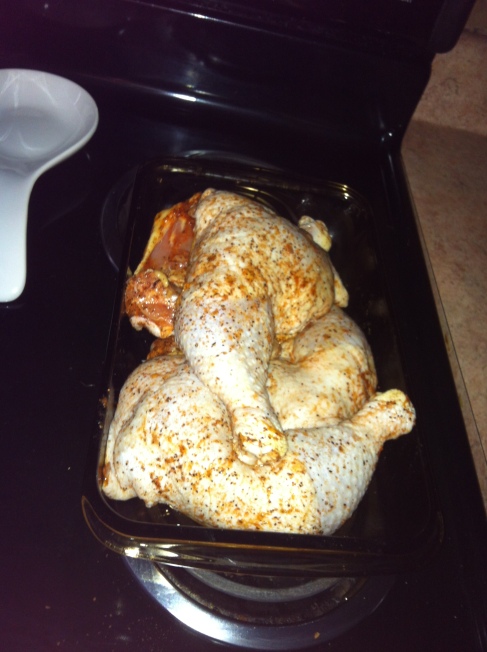 Needless to say the only leftovers are a few slices of veggies.  The chicken was devoured in minutes. I planned on making mashed potatoes but was too lazy (which is really saying something because they were the instant kind, ha!) I’m actually glad I didn’t, would have been too much … every food group doesn’t have to be present; starches are bad for Josh anyway.  Plus I hate making REAL mashed potatoes for two people, it’s better in large amounts but reheated mashed p’s is never tasty.

I’ve got 3 dinners of my own to plan and then fajita Friday will be courtesy of Kathy, I get to hang out with Miss E again.

Monday may have started off ‘manic’ but when you know dinner is coming from the spice king & queen; the day could only get better.

OPA! My inspiration: Greek food. Prepping everything took 30 minutes… 1 entrée and 1 side dish; add on grilling the flank steak, 6 more minutes. Can it get any easier than that? Of course it can! If my sous chefs would actually help everything would have been done in 15 minutes. I tripped on sous chef Geno at least 10 times and then the stupid step stool jumped out in front of me twice.  Maybe Geno moved it on purpose hoping I would trip and drop some tasty food for him to inspect.

Really though, this is the easiest meal to put together. Even better, the recipes called for repeat ingredients which allowed me to set up a buffet station, more counter space for me! 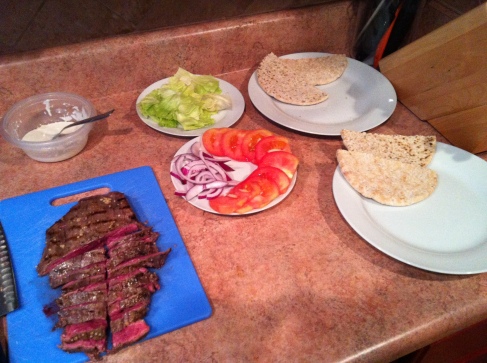 Josh was the grill master once again but I almost had to turn to my bestie, the broiler. We thought the propane had run out but thankfully he was able to get the grill going.  As usual, the dogs went nuts outside and ran “mad dog” the entire time.  Needless to say, sous chef Ella was pooped after playing with the big boys! 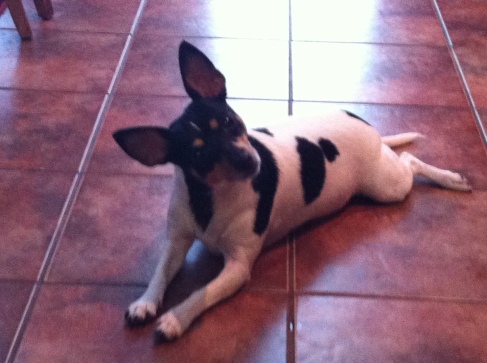 After I finished prepping the 2 dishes there was enough time for a dance party. With an apron like this… we’re never too serious. 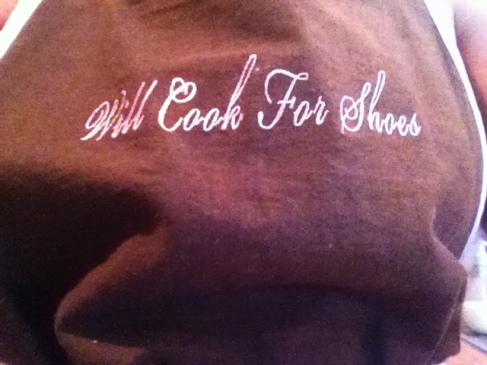 I was super pumped for this meal, Josh was mostly excited about the feta cheese. We actually fought for a piece that dropped on the counter. I won and became “the meanest person ever”… mind you, the open container was sitting about 5 inches away. HA!  The cucumber salad was amazing, I think it’s my new vegetable obsession.  The recipe called for English cucumber but regular cucumbers will work if you peel them first and they’re cheaper, MUCH CHEAPER. I used 2 regular cucumbers since they’re a bit smaller. 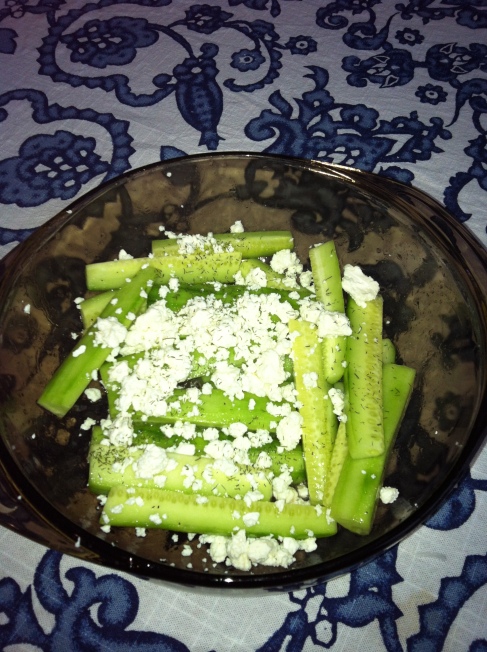 Overall, dinner was a hit – a few minor adjustments were realized on our end though.  The flank steak needed to be cooked longer, maybe 5 minutes on each side to MEDIUM.  If we were cooking normal steaks we prefer them “moo-ing”.  The flank steak was hard to chew through since it was still pretty rare.  With our attempt to be healthy I opted for multi grain pitas but they fell apart as soon I tried to open the pocket. They continued to break in pieces while loading the toppings too.  The pita’s were P.I.T.A’s. Someone needs to come up with better quality “healthy” bread, it’s so frustrating.

The night ended with an easy clean up. Even our sponge was happy about it (the yellow smiley face guy… not the depressed “used to be pink” sponge).  I take that back, almost easy clean up… after the steak sat while we ate, the blood pooled under the cutting board. Gross, it looked like a murder scene.  Josh suggested we call Dexter and have him analyze it. As I wiped up the mess, in unison we started singing “murder she wrote“. Freaks? No, 100% mind readers. 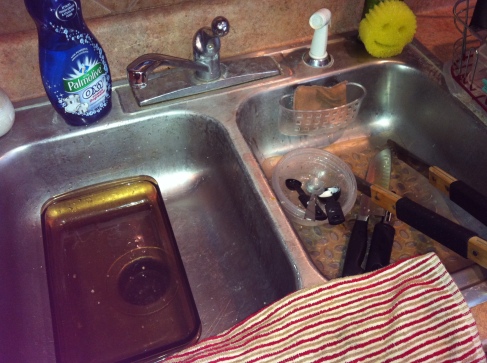 I can’t promise any “gourmet” meals over the weekend… even the best of us need to take time off.  Next week however, I can not wait for! My friend Kathy is bribing me to watch Miss E by sending me home with prepared dinners. I’d be crazy to pass up a chicken that will be marinating for 3 days. She knows I’d watch Miss E even if she offered PB&J, that kid is freakin’ cute.

One “pre TMEA” performance down, one to go... then it’s the real deal. We performed for the band students at Dwight Middle School this morning. Good run through guys! #tmea100 #itstartswithmusic #sanantonio #texas #musiceducators #band #saxophonequartet #sonoradolcesaxquartet @sonoradolcesax

read about the tails from my kitchen: organizing, menu planning, and cooking!

Rantings of an Amateur Chef

Two urban mothers that post about organic, made-from-scratch recipes, fermented foods, canning escapades, diy projects, crafts, fun things we do with our kids, gardening and anything else that catches our interest.

tails from the kitchen

a humorous take on cooking right

Because two blondes are better than one!

From classroom to living room and everywhere in between

The Art and Craft of Blogging

The latest news on WordPress.com and the WordPress community.